Partners for a Cleaner Danville

On an international level, Rotary does a lot of work on helping to provide clean water to reduce waterborne diseases, keep children healthy, and allow mothers to spend more time with their families.  In the United States, clean water is a given.  Locally, Danville Rotary wanted to look at how we can be better stewards of our clean water.

This idea germinated with a Danville Community High School student during our annual Speech Contest. Her topic involved a water bottle refilling station and the impact that has on the environment in reducing waste.

One of our club fundraisers is to sell pizza each year at the Downtown Danville Partnership Summer Sounds concert series.  We also sell bottles of water.  On average we go through 100 bottles of water for a concert.  There are four concerts so we are looking at 400 disposable plastic bottles that we could try to eliminate.

Our current President, Kevin Hill, spoke to Rex Leach.  Leach & Sons Water Systems is a local provider of water and water softening equipment.  Rex agreed to help us in this effort by providing us a water cooler and large bottles of water to dispense into refillable containers.

The second step was the container.  After some thought and discussion, it occurred to us that many local merchants have disposable cups they are using that might be eliminated too.  This quickly became a “bigger than Rotary” project, and we enlisted the help of the Greater Danville Chamber of Commerce and the Downtown Danville Partnership.  Hendricks Regional Health became aware of the effort and came alongside us with support as well.

Through those partnerships, we were able to communicate with many local merchants about this idea.  We found a lot of support, and in fact many were exploring how they could get more environmentally friendly disposable cups without spending an arm and a leg.

In the end, we developed this 20 ounce aluminum tumbler that we are making available to the community for $10.  This cup can be used at Summer Sounds for FREE water from the Danville Rotary Club.  Also, we can eliminate many of the disposable beer cups at Summer Sounds as Two Guys Pies has agreed to fill this 20 oz cup for the same price as the 16 oz cup.

The cup can also be used at Evenings in Ellis as Indy Beer Taps will do the same.

In addition, many local merchants will offer a discount for using this cup instead of a disposable cup for “to go” drinks.  Current merchant participants and discounts include:

Tumblers are available at the Danville Chamber Office for $10 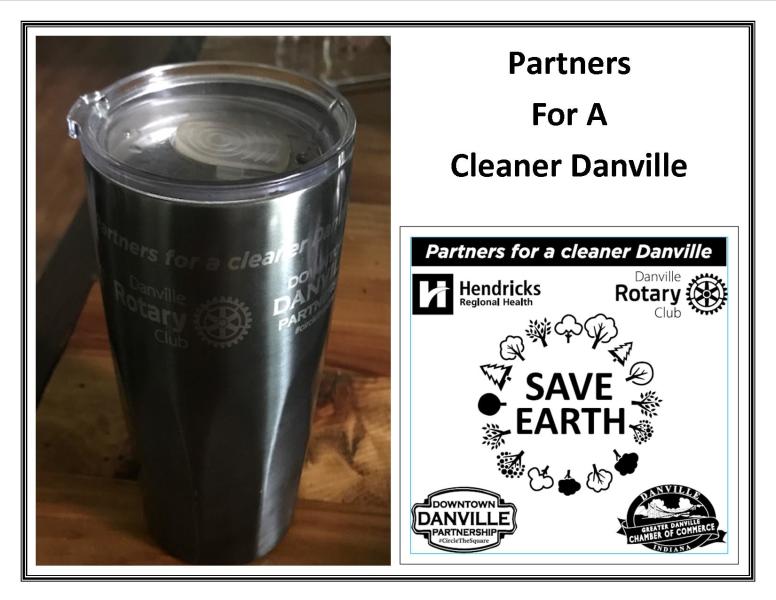